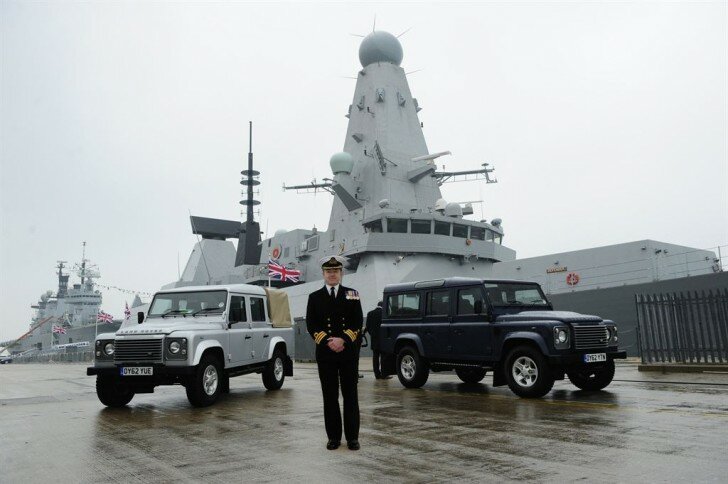 Land Rover joins the celebrations for the commissioning of the Royal Navy’s newest warship today by announcing an affiliation with HMS Defender and supplying a Land Rover Defender for its use whilst on dry land. Company representatives will be among the guests attending the official ceremony at the HM Naval Base in Portsmouth, the Type 45 destroyer’s home port.

The name provides an obvious link: HMS Defender is the navy’s fifth warship of its name, while today’s Land Rover Defender can trace its roots directly back to the original Land Rover of 1948. The two are also fine examples of British engineering, the former built at the Govan shipyard on the River Clyde in Scotland, and the latter at the Land Rover plant in Solihull. Both are designed and equipped to tackle tough, albeit very different, environments around the world.

Mark Cameron, Land Rover Brand Experience Director – Global Marketing, said: “We are proud of our Land Rover Defender as an expression of what Land Rover has stood for for more than 60 years, and in the same spirit we are also proud of our new association with HMS Defender and her servicemen and women.

“Our affiliation reflects shared values and heritage that represent the best of Britain on the world stage. We look forward to sharing experiences and friendship in the future as HMS Defender takes up her duties.”

HMS Defender Commanding Officer, Commander Nash said:  ”The Commissioning of HMS Defender is a hugely significant day in this state of the art warship’s life – it marks the point at which building and testing the ship finishes and frontline service in the Fleet begins.  It is also important to recognise that for the 190 women and men that make up my ship’s company this day of Commissioning represents the culmination of months and years of hard work, of training, trials and practice focussed on ensuring that Defender is ready to undertake operations around the world whenever tasked.  We are extremely proud of our achievement and would like to thank our partners in British industries for their assistance in reaching this goal. Land Rover have lent great support for the staging of the ceremonial event today and on behalf of My Ship’s Company and guests I would like to pass our sincere thanks for that assistance. ”

Today’s commissioning ceremony is a significant occasion that will be recorded in Royal Navy history, the moment when HMS Defender is officially taken up into the Fleet’s Order of Battle under the White Ensign. The destroyer was launched in 2009 and has undergone extensive sea trials prior to entering service this year. It has a number of other affiliations, notably with the cities of Glasgow and Exeter.