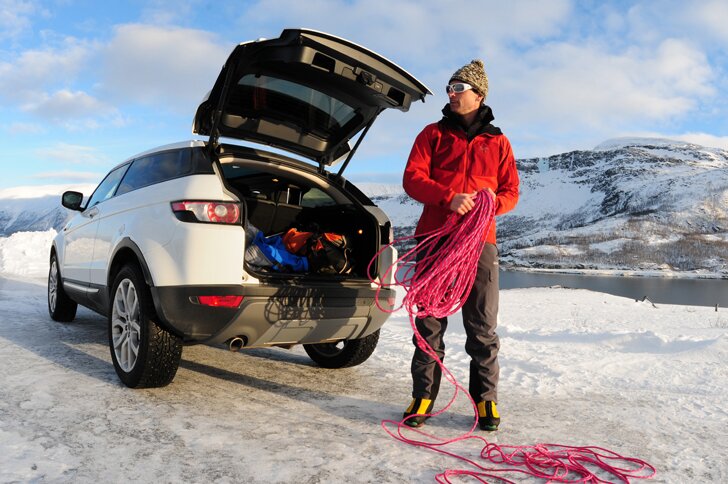 Kenton Cool, one of the world’s most accomplished mountaineers, is partnering with Land Rover as the latest ambassador for the brand. His exceptional climbing feats and ground breaking use of latest technologies are perfectly in tune with the Above and Beyond spirit of adventure that is part of the Land Rover ethos.

Cool takes on this role as preparations for his next major expedition reach their final stages. At the end of April he will return to Everest with a mission to be the first person to host a Google Hang-out live call from the summit. Cool is no stranger to what is one of the remotest and challenging places on the planet; this will be his 11th Everest climb.

Land Rover has supported Cool in this current ambition by providing a Range Rover Evoque as the support vehicle for him and his team, taking them to the ice climbing training region in Arctic Norway earlier this year.

The Range Rover Evoque proved its mettle in near blizzard treacherous conditions, as Cool explained: “As part of the team’s training we went to the Lyngen Alps, Norway with the intention to climb previously unchartered routes, which were by their very nature off the beaten track. The Range Rover Evoque truly came into its own. By using the Terrain Response® snow and gravel mode I had the confidence to go as close to the edge of the mountain as possible enabling the team to make the most of the short daylight hours to climb. This is critical in our preparation plans to conquer Everest.

“The studded tyres gripped like spilt honey does to the floor, and no amount of playing with the wheel and controls could get the car to lose traction for more than an instant. At the end of each day the team were exhausted, having climbed for hours in temperatures of -15oC. Returning to the Evoque was such a welcome sight, extremely comfortable and easily coping with four exhausted climbers loaded with ice climbing kit. It really was a site for sore eyes.”

“However, one of the best things about the Range Rover Evoque was the panoramic glass roof which enabled us to catch our first glimpse of the Northern Lights. I had never experienced the Lights before and we watched this spectacular show from the best seat in the world.”

Mark Cameron, Land Rover Brand Experience Director, Global Marketing said: “We are delighted to have Kenton Cool as an ambassador for Land Rover, his skill, bravery and amazing achievements are a great reflection of the kind of spirit that is at the heart of our brand.

“His latest plan to host a Google Hang-out on the peak of Everest adds an extra dimension to the climb that promises to engage thousands of people around the world using the latest communications technology. Land Rover is delighted to be able to support him in this great adventure.”